Standing ovation for this hero last night at City Council Meeting. From Mike Benham: "In the virgin river cafe, a guy was choking by the time I got to him jeff had started the Heimlich maneuver and was successful in his effort I contacted chief Andrus about giving this award to jeff well deserved. Mesquite has a new hero Jeff Frazier" Well done Mr Frazier! Thank you Mike Benham and Chief Andrus for recognizing this young man.
Read more

After some delay, I have been officially sworn in! 2018 was the first election year in Mesquite since Mesquite had a Charter. The Charter does not address when newly elected officials are sworn in. However, precedent was set in 2018 when newly elected Councilors were sworn in at City Hall before the first Tech Review meeting in December. However, this was impossible this year, 2020, as there were not enough members of Council to hold the Tech Review meeting as scheduled. Councilors Rapson and Wursten did not attend, and the seat vacated by newly elected Assemblywoman Black was still vacant. Nonetheless, after conferring with legal counsel, I was determined to be sure City Hall knew they were obligated to seat the newest elected Councilor. It was an honor to have my family with me, and to be there for the swearing in of Mayor Litman's new term. You can read more about it in this article from our local newspaper, The Progress: https://mvprogress.com/2020/12/09/litman-boger-sworn-in-
Read more

Thank you Councilwoman and Nevada Assemblywoman-Elect Annie Black for your support and endorsement! “Wes is a conservative small businessman with experience in creating private sector jobs who’s also been extremely involved in our local schools and has the support of our law enforcement officers. “Our community will be well-served having Wes represent us on the council,” Black concluded, “and AnniePAC is proud to offer him our endorsement.” AnniePAC supports conservatives in key elections throughout Nevada. For more information, go to:  anniepac.com #VoteYesForWes
Read more 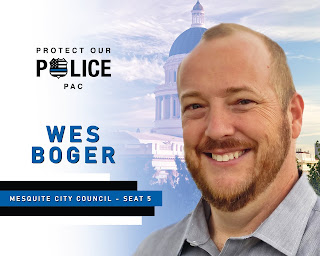 Proud to announce I have received the endorsement of Protect Our Police PAC.  This nationwide PAC announced their initial endorsements today.  I am one of just 40 candidates across the nation they chose to endorse in their initial round of endorsement.  Thank you Mr Gerace, Protect Our Police, and each donor for your support!  I am truly humbled!  FOR IMMEDIATE RELEASE: September 22, 2020 Contact: Nick Gerace (267) 571-7114 info@protectourpolicepac.org Protect Our Police PAC Announces 2020 Endorsed Candidates; Announces $250k+ Candidate Fund PAC founded by retired Philadelphia Police endorses pro-law & order leaders in nationwide races from City Council up to Governor (Philadelphia, PA) -- Today, Protect Our Police PAC announced it’s first-ever slate of endorsed candidates ahead of the November 3rd election. POP PAC is endorsing more than 40 candidates nationwide running for public office in the upcoming election for positions including Governor, State Representative, Senate Senat
Read more 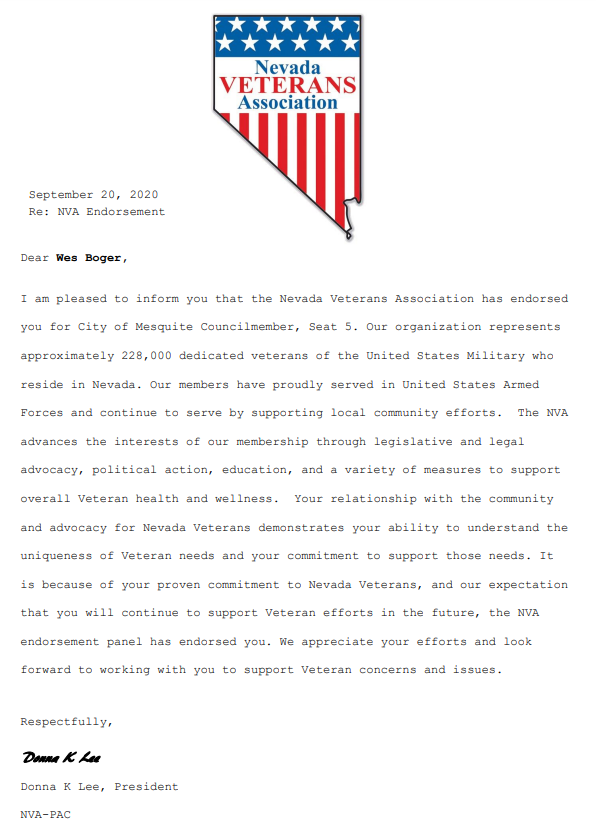 Excited and very proud to announce the endorsement of Nevada Veterans Association! Thank you for your support! More importantly, thank you for your service! Founded by a veteran of the US Navy, The Nevada Veterans Association is a PAC dedicated to providing a voice for over 200,000 vets here in Nevada, including advocating for mental health, housing, and employment for those who selflessly served our country. Thank you Donna Lee and NVA PAC for seeing a need in the community, and doing your best to find solutions! #VoteYesForWes
Read more 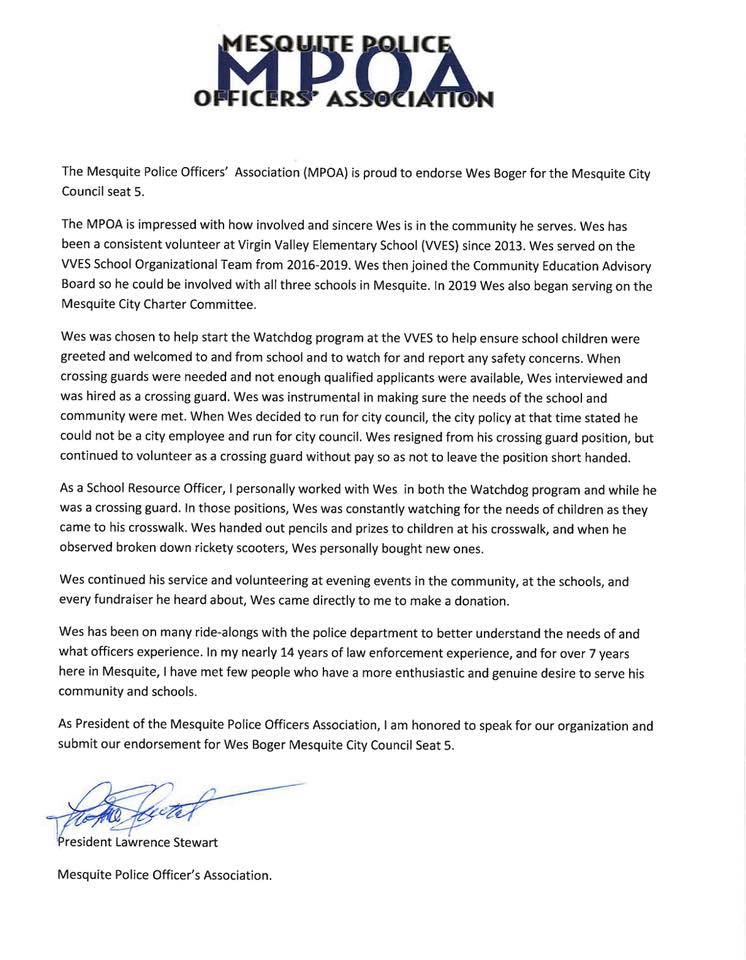 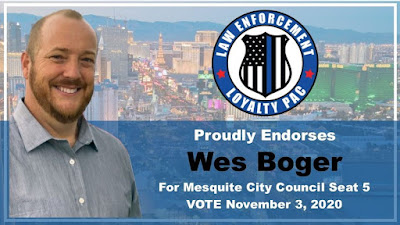 Thank you Sam Peters and Law Enforcement Loyalty PAC for your endorsement and support! "Law Enforcement Loyalty PAC has vetted numerous candidates for endorsement based on a survey questionnaire, interview, and record supporting police. We will be releasing these endorsements over the next 10 days. Tonight we highlight Wes Boger - Endorsed for City Council Seat 5, Mesquite, Nevada. Go get 'em Wes!" #VoteYesForWes
Read more 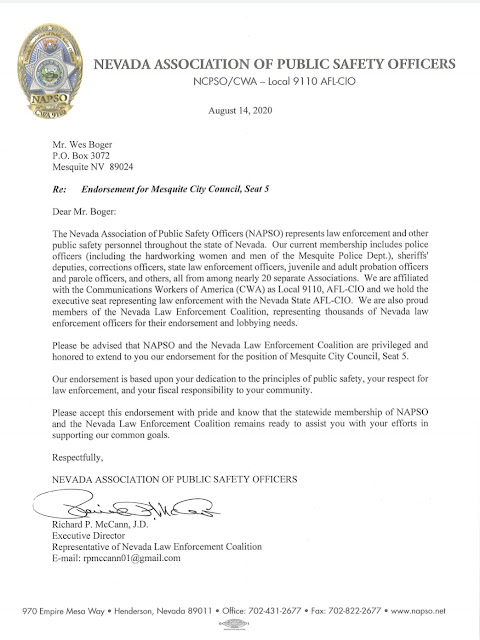 Proud to have the endorsement of Nevada Association of Public Safety Officers ! "Our endorsement is based upon your dedication to the principles of public safety, your respect for law enforcement, and your fiscal responsibility to your community." Thank you NAPSO! #VoteYesForWes
Read more 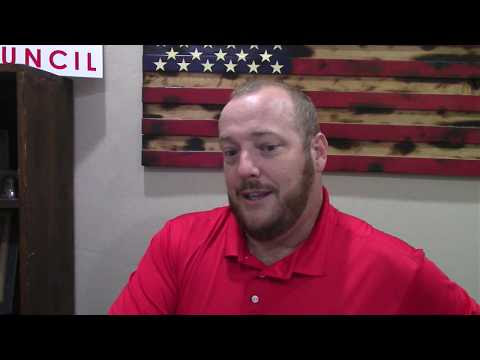 Hi I'm Wes Boger, Mesquite City Council Seat 5 Candidate. I am VERY excited to announce WE have made it through the Primary! I would like to congratulate Karen Fielding on making it through the Primary for Seat 5.  We'll be facing off in November. Would like to congratulate Brian Wursten on winning Mesquite City Council Seat 2. I'd like to mention the candidates who did not make it through. Ronnie Skurow Karen Dutkowski Steven Lisk Paul Wanless They are all great strong candidates.  Was great to get to know them a bit during this wacky social distancing lock down campaign!.  All brought up great ideas during campaign and I am looking forward to working with them to make Mesquite the best it can be! We live in a very involved community.  There were over 6000 Mesquite voters that took part in the Primary! Finally to those who have helped so far to support this campaign - donating time, money, advice, expertise and encouragement - THANK YOU! If you'd
Read more 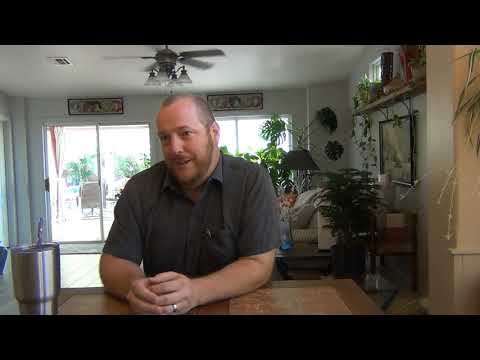 If there is only ONE 3 minute video I would implore any potential voter to watch before casting their vote, it is this: #VoteYesForWes
Read more
More posts